Even before the pandemic, record numbers of people in the UK were seeking help from food banks, increasing by 74% over the past 5 years.

4.7 million of these people live in severely food insecure homes, leading to their food intake being greatly reduced and children regularly experiencing physical sensations of hunger.

A child going short of food is a heartbreaking thought – but the harsh reality is; 16% of parents claim that their children had to make do with smaller portions, had to skip meals or go a day without eating. This figure amounts to almost two million children being in this awful situation throughout 2020.

As we struggle to comprehend these tragic facts, many key figures and organisations have joined the fight to make hunger history. England football star, Marcus Rashford teamed up with FareShare to raise £20m for charity and reach three million children across the country.

The sportsman wrote an open letter to the UK government, asking them to end UK child poverty. A day later, a change in policy was announced regarding the extension of free school meals for children during summer and Christmas holidays. Rashford was awarded an MBE for his efforts. 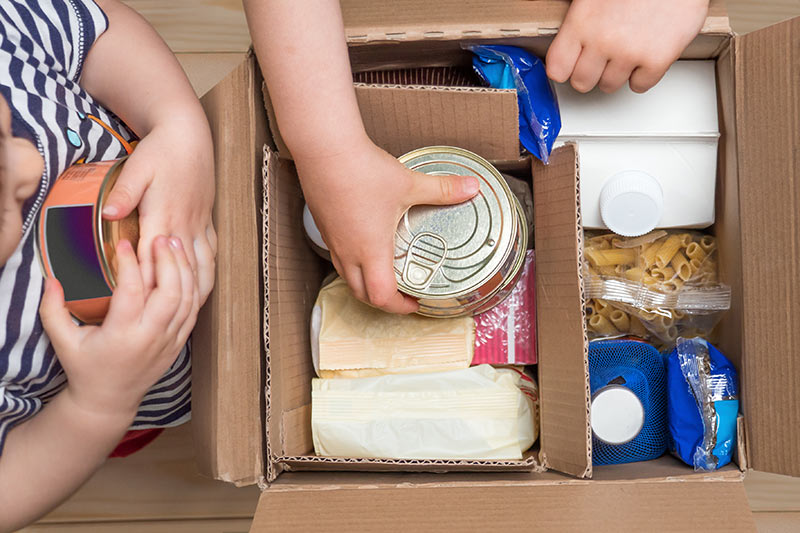 “The Task Force is building momentum daily and I am proud to see huge players in the food industry committing to our aligned vision of combating child food poverty in the UK.”

Marks & Spencer said it donates surplus food to over 950 charities and organisations – which includes 60 Trussell Trust food banks. Meanwhile, Lidl donates to food banks only via its food distribution programme Feed it Back, which involves the donation of edible surplus.

Hovis’ ‘Best of Both’ has committed to increasing its support for families living in food poverty by donating an additional 250,000 loaves. This is enough bread to make an additional 2.5 million sandwiches in 2021 on top of the annual donation of 250,000 loaves from the brand.

On the 28th and 29th of January, a variety of huge names from the music world including; Liam Gallagher, Sam Smith, Blossoms and Newton Faulkner supported Rashford’s initiative through a virtual music event. Entitled “Music Feeds”, the two-day festival was organised by food partner retailer Co-op and the non-profit organisation Everybody Belongs Here.

The ethical supermarket, Co-op, donated a total of £1M to the Music Feeds event, which will go to FareShare to fight food poverty – helping to provide around 2.5 million meals. The money will also support Help Musicians and Stagehand; two music industry causes who care for musicians and live production staff during times of crisis.

Showing that you care

Corporate Social Responsibility (CSR) has been on the agenda for many businesses in recent years, as industry professionals recognise that it is good practise for corporations to respond to widespread social concerns. Purchasing from a compassionate brand that fights against injustices within society is hugely attractive to consumers.

In an online realm distinguished by the “naming and shaming” of company’s corporate practices for not conforming to their social visions; a principled business can foster a dialogue with their demographic via social media and gain consumer respect. At Cordis, we recognise that creativity is the key to successful communication – by employing our expertise in social media, copywriting, design, events and videography; we can successfully manage your desired customer relationship.