After a three-year absence owing to the pandemic, Norwich City Council’s Christmas Switch On officially returned on November 17th 2022! The stage outside city hall saw magical and captivating performances from Linda John-Pierre in her role as Fairy Fullobeans from Norwich Theatre, Framtastics Gymnastics Club, The Austin Beats, Maddermarket Theatre actors – and even a special appearance from the man in red himself; Santa Claus!

Cordis were given the opportunity to promote the Christmas Switch On event for Norwich City Council. This multi-channel campaign employed our various skills, including social media management, graphic design, video production and augmented reality. 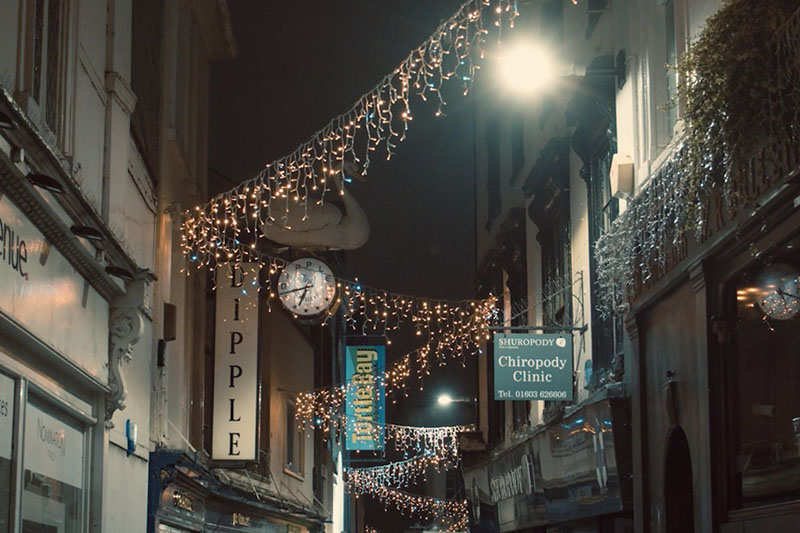 On the lead-up to the event, we developed a series of graphics based on pre-existing content created for Norwich City Council. The selection of artwork represented a countdown (ten to one) to be posted on each social media platform on the days prior to the event. By posting consistently on the lead-up, we helped generate widespread excitement for the Christmas Switch On.

This activity was also supported by regular posts in the evenings, promoting one of the various elements of the switch on show. This gave each contributor their own time in the spotlight, whilst building online anticipation for reveal of this year’s line-up.

To accompany our social media campaign and drive footfall toward city hall during the event, we created a CGI mascot – Rodney the Reindeer. Using the Snapchat app’s augmented reality technology, attendees could interact with this cute Christmassy character – or even swap their own face for his! The images could then be uploaded to a social network of choice, using the hashtag #Norwich – thus helping spread awareness of the event.

By the end of the event, Rodney the Reindeer had been viewed 2536 times on Snapchat. The character had also been shared 633 times.

Discover how our expertise in augmented reality & virtual reality can help you. 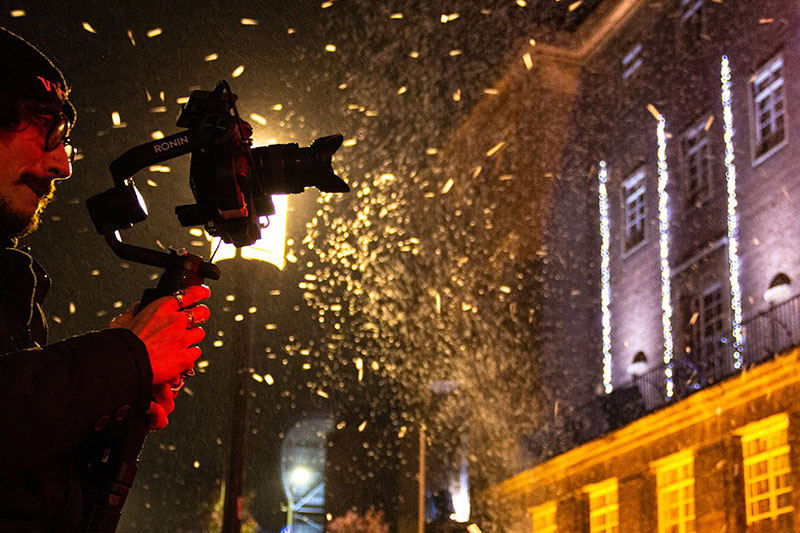 In the days after the Christmas Switch On, we produced a video that allowed attendees to recall the sheer spectacle of the event and relive the best moments from the evening. This montage could also be used by the council to promote future events, attract attention, participants and investments.

Production on this piece began on the Monday before the festivities. The Cordis team ventured into Norwich City Centre to grab preliminary footage of Santa Claus suiting up and various shots of the Christmas lights being tested by technicians.

On Thursday the 17th at 6pm, the show began! Armed with a Black Magic Pocket Cinema Camera, mounted on the Ronin-SC – supported by shots from a mounted GoPro and Insta360; Cordis were ready to capture the event in its entirety.

After the shoot, Cordis immediately got cracking with the editing process in Adobe Premiere Pro and After Effects. However, no clips could be set onto the timeline until a suitable soundtrack had been selected. The firework display at city hall was set to a sublime version of “Carol of The Bells” – we therefore thought this historic piece of music would make a fantastic soundtrack to our video.

The footage was colour graded and timed to the track; chronologically depicting the event and building to a crescendo of fireworks and snow. The video has been used on Facebook, Instagram, Twitter and Youtube, achieving acclaim from the council’s followers.

The superb social media campaign and brilliant design work was key in drawing thousands of people to Norwich City Centre on November 17th. We would like to thank everyone at Norwich City Council for giving us the opportunity to shoot this wonderful event. Fingers crossed we can return next year and make a sequel…

In the meantime, the mini movie can be viewed in all of its splendour on Vimeo. We recommend viewing in HD, full screen with the volume cranked up!